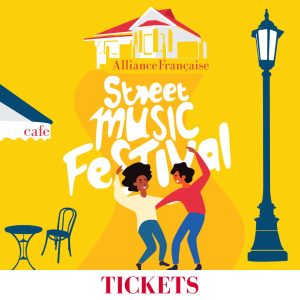 What you should expect :

There will also be social media promotions and super-creative offerings from some of NMB’s brightest talents. You and the kids can also get hands-on with some of the activities.

Stanley Street, in Richmond Hill, will be closed off for your walking pleasure !

It’s time to get back to the streets!

This festival is inspired by French “Fête de la Musique”. The Fête de la Musique, also known in English as Music Day, Make Music Day, or World Music Day, is an annual music celebration that takes place traditionally on 21 June (which is the first day of summer in the Northern Hemisphere). On Music Day, citizens and residents are urged to play music outside in their neighbourhoods or in public spaces and parks.

The first all-day musical celebration on the day of the summer solstice was originated by Jack Lang, then Minister of Culture of France with Maurice Fleuret, director of music and dance at the Ministry; it was celebrated in Paris in 1982. La Fête de la Musique later became celebrated in more than 120 countries around the world.

So let’s celebrate Music all together !

The Alliance Française is a not-for-profit association dedicated to the promotion of the French language and culture, supported by the French Embassy in South Africa. They offer French, Xhosa, and English class, in addition to a French Library and weekly cultural events.
Magnetic Storm organises the biggest festivals in Nelson Mandela Bay. Supported by the Nelson Mandela Bay Municipality.

Call for application :
We are very excited to be featuring school choirs at the Alliance Francaise Street Music Festival this year!

We are featuring all the best musical acts at the Alliance Française Street Music Festival, 3rd September 2022!

We’d love to showcase YOUR TALENT!
Send us a 2 minutes video of your act, share a bit about yourself/ group or band and include your contact details.
Email: events@magnetic.co.za
Closing date: 8 July 2022
Spread the word! Share this post with your talented friends who you would like to see at the festival.